Where to go in Peru

Peru is a large country with many geographical regions. If you are short on time and are not sure which parts of the country to visit it can be a daunting task knowing exactly where to visit. With natural prowess, Inca archaeological sites, and a fascinating history, there is something for everyone in this incredible country. Here is a description of where to go in Peru on your trip to this land of awe-inspiring wonders. 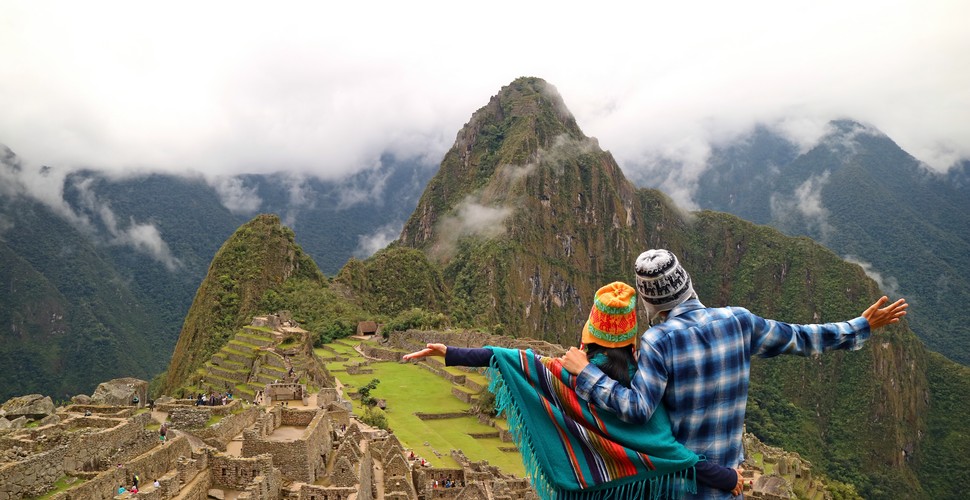 We should start at the beginning and the main reason why so many people choose Peru as a holiday destination! Machu Picchu lives up to its name as a mystical and awe-inspiring Inca archaeological site. Built with impressive precision, attention to detail and geographically challenging terrain, Machu Picchu consists of temples, private adobes and ceremonial platforms that emanates sacred energies. Machu Picchu, meaning “old peak” in the ancient Quechua language of the Andean region and can either be reached by a two hour train ride from Ollantaytambo in the Sacred Valley or the can be hiked along the 42 km trail,  if you are feeling adventurous! 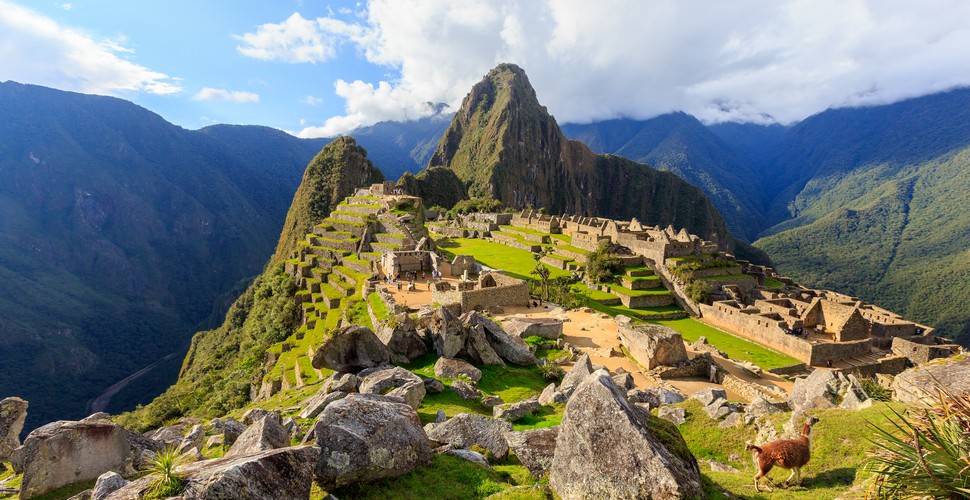 Kuelap, in the Amazonas region of northern Peru, is a walled settlement that has been around since the 7th century. The Chachapoyas culture built the fortress, pre dating the magnificent Machu Picchu by 500 years! Similar in size to the Inca citadel of Machu Picchu, Kuelap is found at an elevation of 3000m and is formed by a number of circular constructions, making it one of the largest archaeological sites in the Americas. Cable cars will give you a bird’s eye view of this incredible Chachapoyan marvel! 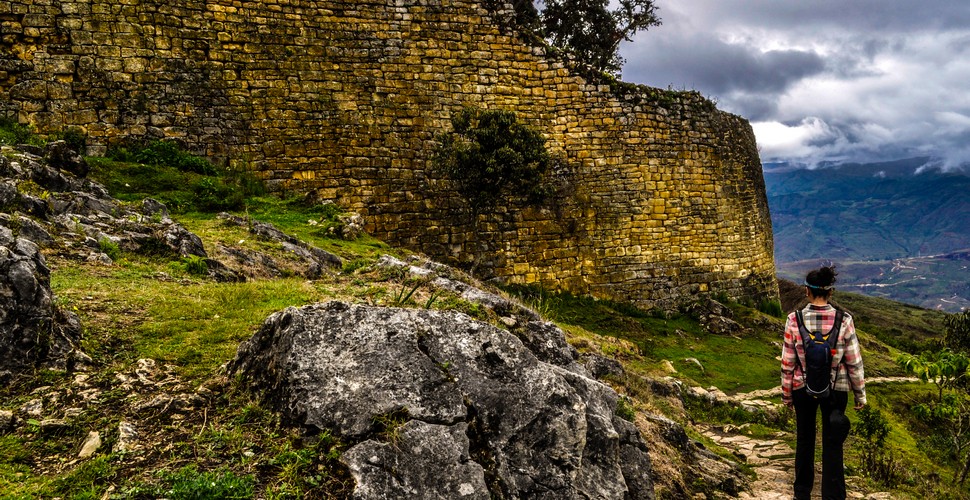 The ancient city of Caral, was built around 5000 years ago and is found in an excellent state of preservation. Located in the high desert in the Supe Valley, just a few hours outside of Lima, this UNESCO World Heritage Site also predates the Incas. The site was important for the development of the Andean culture, from separate tribes to a shared urban community. Visitors can wander through a complex citadel of the Norte Chico culture, consisting of “adobe” amphitheatres, ceremonial rooms, circular plazas and the remnants of six pyramids. 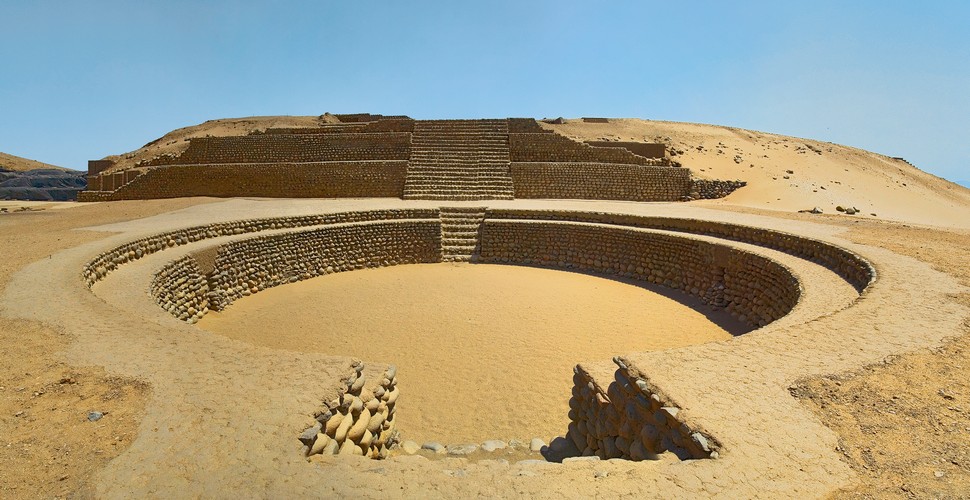 The heart of the Inca Empire, The Sacred Valley (Valle Sagrado) is the gateway to Machu Picchu. Most travellers will zip through the valley on their way to the Inca citadel, missing the unique villages nestled in the valley, the remote archaeological sites, artisan workshops and living Andean civilisations, native to the Peruvian highlands. Close to Cusco, the eclectic town of Pisac, has its own hilltop Inca citadel and one of the most famous markets in the region. Urubamba, is further along the base of the valley and is a hub for adventure tourism, such as rock climbing, trekking and mountain biking. The neighbouring village of Ollantaytambo is home to the Inca fortress named after the famous general of the Inca Pachacutec. 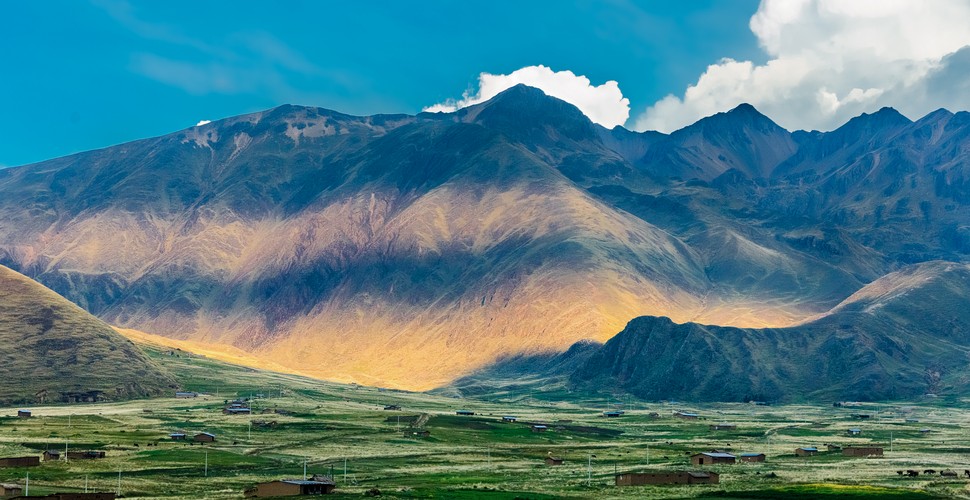 The Cordillera Blanca is one of the most impressive mountain ranges in the world with the town of Huaraz being Peru’s capital of mountain climbing. This adventure town is the perfect base for a number of outdoor excursions, with green valleys that give way to the snowy summits of the Cordillera Blanca, turquoise lakes and soothing hot springs. Experienced trekkers will focus on scaling the summit of Peru´s highest mountain, Huascaran, for those who prefer day trips, or shorter excursions, there are natural sites such as the Laguna Churup or The Santa Cruz and Huaywash treks. 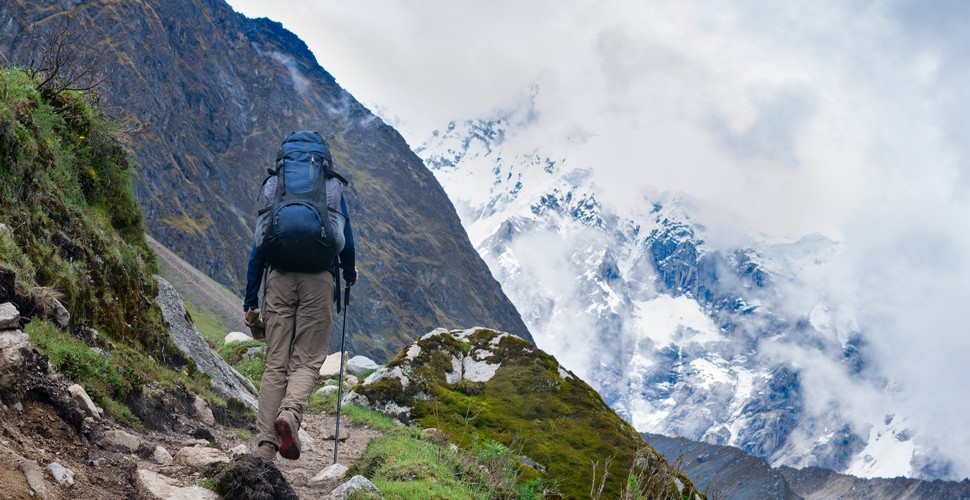 Forming the border between Bolivia and Peru, Lake Titicaca is a huge body of water found at an altitude of 3800 metres. This important lake was of relevance to the Incas and Andean mythology as the origin of the first Inca, Manco Capac, and his wife, Mama Ocllo. This geological wonder, is the highest navigable lake in the world and it’s the home to the floating reed islands constructed by the Uros people, who live on these islands to this day.  Tourism is incredibly important for this community, and some families offer homestays for tourists, especially the non-floating islands of Amantani and Taquile.

Full of history, challenging hikes and spectacular views, Choquequirao is often described as the sister of Machu Picchu This impressive site is at least twice as big as its famous Inca counterpart and is similar in structure.  Choquequirao receives a lot fewer visitors and you can only reach the archaeological site by hiking.  A minimum four-day hike, filters out many potential visitors, with only the most intrepid of hikers reaching its marvels.  Much of Choquequirao remains unexcavated and a lot of it remains under thick jungle vegetation, only adding to its adventurous image. Choquequirao in the indigenous Quechua language, means “cradle of gold” and it is easy to understand how it got its name! 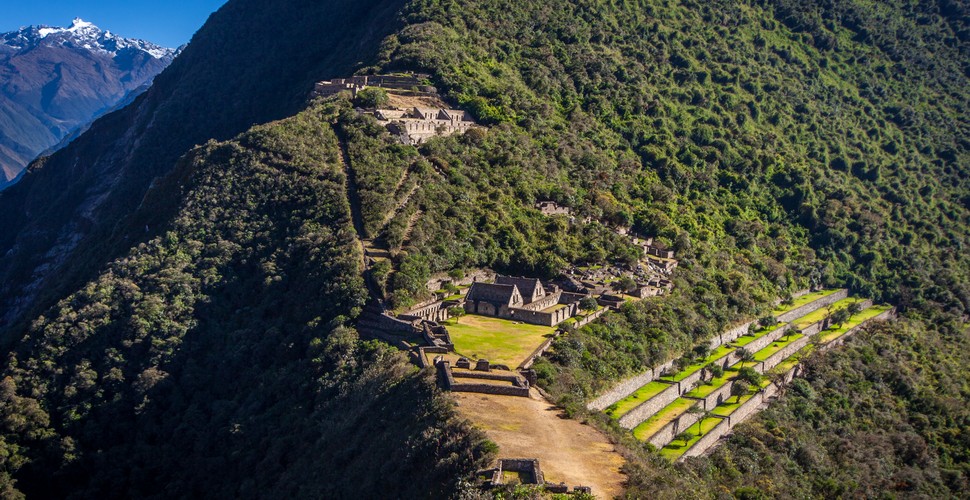 Known as Peru’s White City for its unique colonial-era architecture constructed from volcanic rock called “sillar”. Just beyond the white, chalky structures of the central plaza are treasures of Arequipa´s past, such as the blue and red Monastery of Santa Clara, built in 1579, and vibrant picanterías. Where Arequipeñians head for their lunch. In the distance is the impressive Misti, that decorates the skyline of the city and s visit to the Santa Catalina monastery is the walled city within the city, the home of a Spanish order of nuns. Arequipa is the base for people heading to The Colca canyon for the breath-taking flight of the Andean condor and to witness one of the world’s deepest canyons. 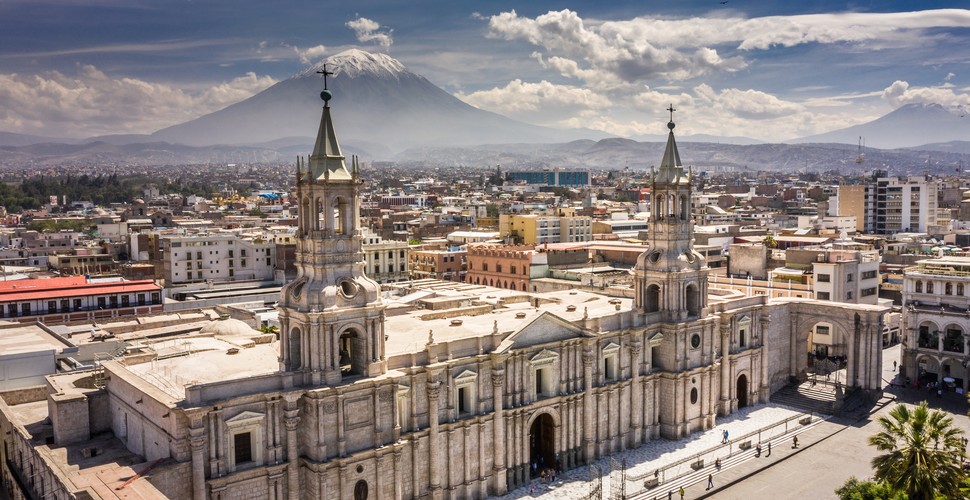 Puerto Maldonado offers easy access to the prime, biodiverse jungles in Peru. From here, visitors can venture into the Tambopata National Reserve, one of the last few pristine areas in the rainforest. Spread over 2000 square kilometres, and decorated with Ox-bow lakes, rivers and rainforest, this protected area is one of the most biodiverse destinations on the planet, home to thousands of butterfly species, bird’s varieties, mammals and plants. Located in the Madre de Dios region, this jungle area is a hit with travellers of all ages, and is excellent for jungle wild-life encounters 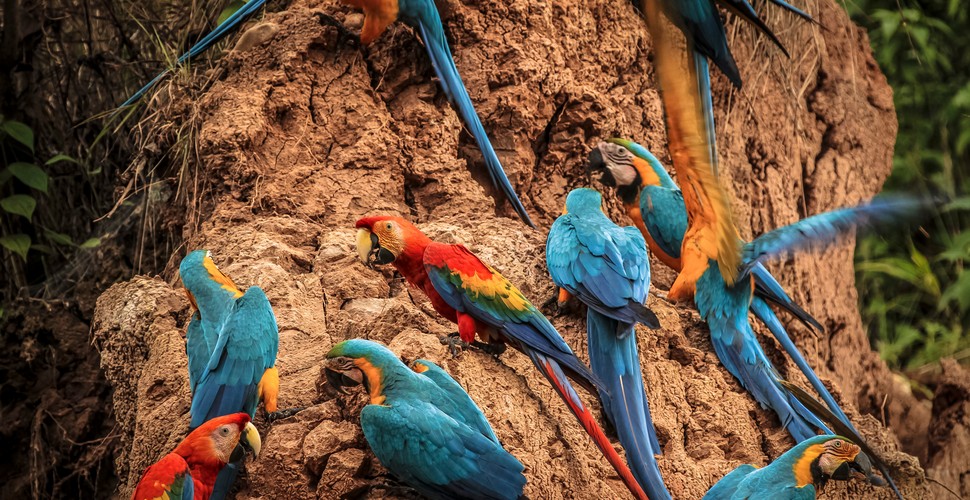 In the vast Ica desert can be found the desert oasis of Huacachina. Rest your eyes upon the sparkling body of water, before plummeting down the sand dunes on a sandboard or in a dune buggy.  Escape from the harsh desert sun at midday by investigating the Regional Museum of Ica or heading out on a on a Pisco tasting tour. If that's not enough, the famous Nazca Lines and Islas Ballestas, are just a short trip away. 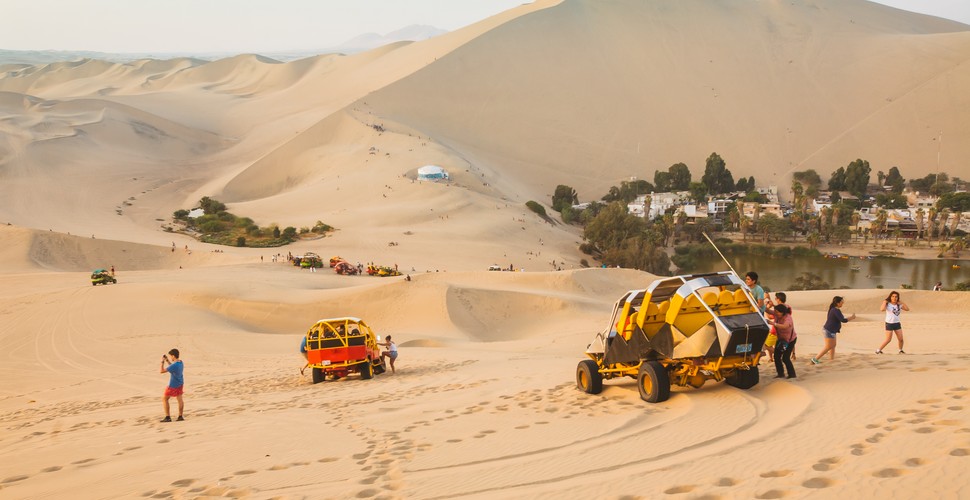