What Traditions does Peru have?

Culture in Peru is a fascinating mixture of the ancient Inca civilization, the Spanish conquistadores, and immigrants such as Chinese, Japanese, and Europeans. The main thing that binds these aspects together is the firm belief in the importance of family, religion, and Peruvian customs and traditions. Here is a breakdown of the most important traditions that Peru had in the past that continue to this day. 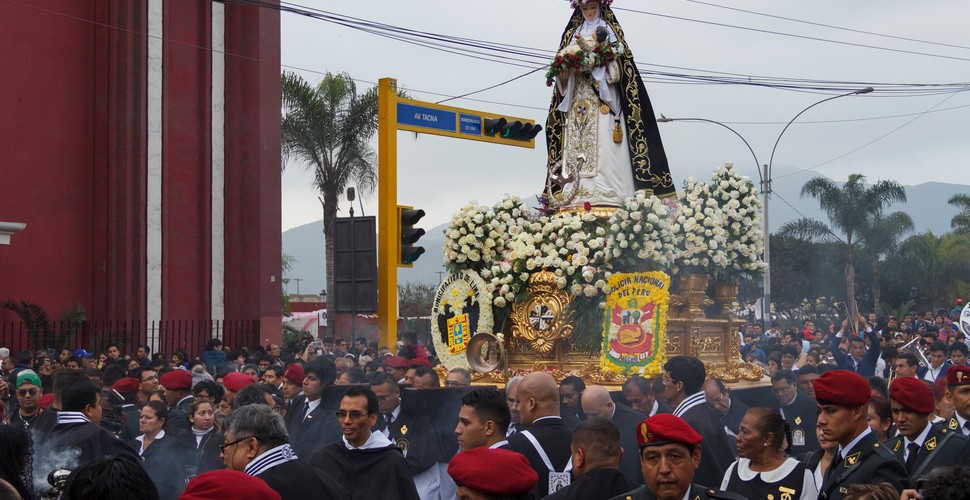 It is said that Peru has more than 3000 official festivals! Each region of Peru has its way of celebrating specific dates, with festivals such as The Virgen de la Candelaria,  in Puno; Qollor Riti in The Ausangate region of Cusco,  Inti Raymi, the sun festival, celebrated every 24th of June in Cusco, Sr de Los Temblores, the saint of earthquakes, celebrated in Cusco during holy week,  El Señor de Los Milagros (The Lord of the Miracles), a catholic holiday that extends throughout all of Peru, with its origin in Lima;  Santa Rosa de Lima, the patron saint born in 1956 in Lima to Spanish Colonists and was known for her piety and chastity. Santurantikuy traditional Christmas markets in the Plaza de Armas, Cusco, are just some festivals that still occur in the country. 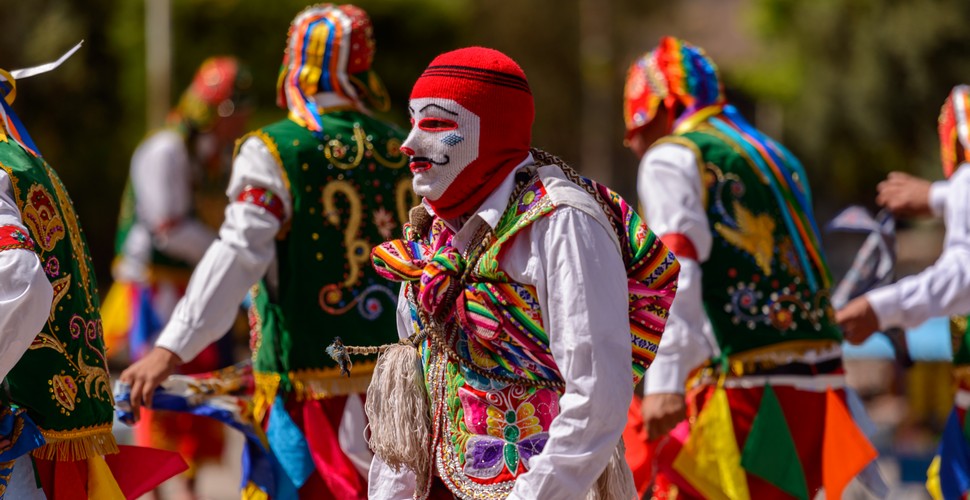 Many traditional ceremonies still take place in Peru. A Pago a la Tierra is payment to Mother Earth in the Andean region, thanking her for her abundance; Flower Baths are one more mystical ritual, widely done in Cusco by locals and foreigners alike. The shamans will pray, sing, use flowery water and holy wood and incense, and be surrounded by Andean animals, so the person will experience blossoming in all areas of life, Passing a cuy (guinea pig, or an egg, all over a person's body to find out what their ailment is; Coca leaf reading, to predict one's future, depending how the coca leaves fall are some of the ancient ceremonies that people still perform today. 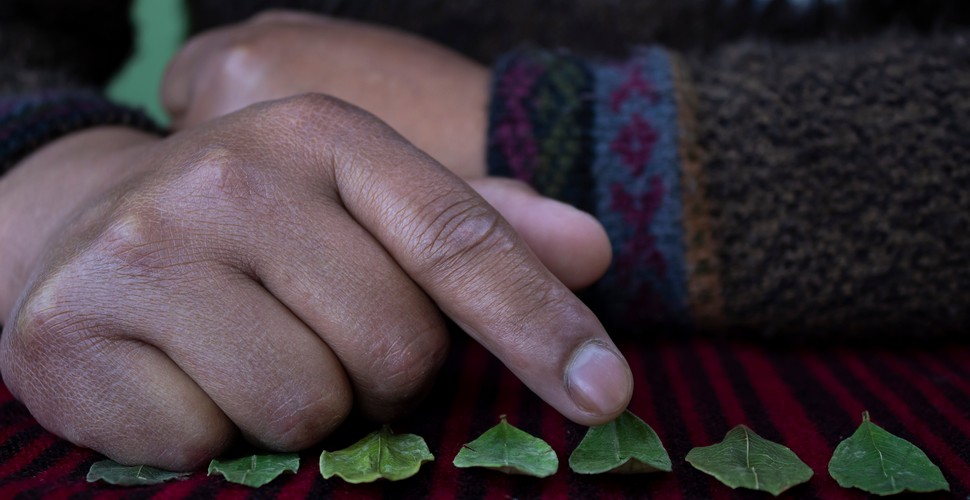 Art and textile have always been essential to Peru's culture, even before Inca times. Local people still spin and weave the wool of alpacas, llamas, and sheep into lovely colorful garments that they then sell to fascinated tourists. They also make beautiful blankets that have culturally important mythological symbols. But wool is not the only thing they weave-. The inhabitants of the floating islands of Titicaca Lake weave reeds to build the islands and the houses where they live. Other handmade crafts are wood carvings and jewelry, especially gold and silver. If you have been to Cusco already, you must be familiar with the "retablos"- the wooden altars from Ayacucho, which depict religious or everyday scenes, or maybe you have visited a weaving community such as Huilloc in The Sacred Valley, where the weaving techniques have been passed down through the generations for centuries, and where even today you can see the most authentic Cusco traditional clothing. 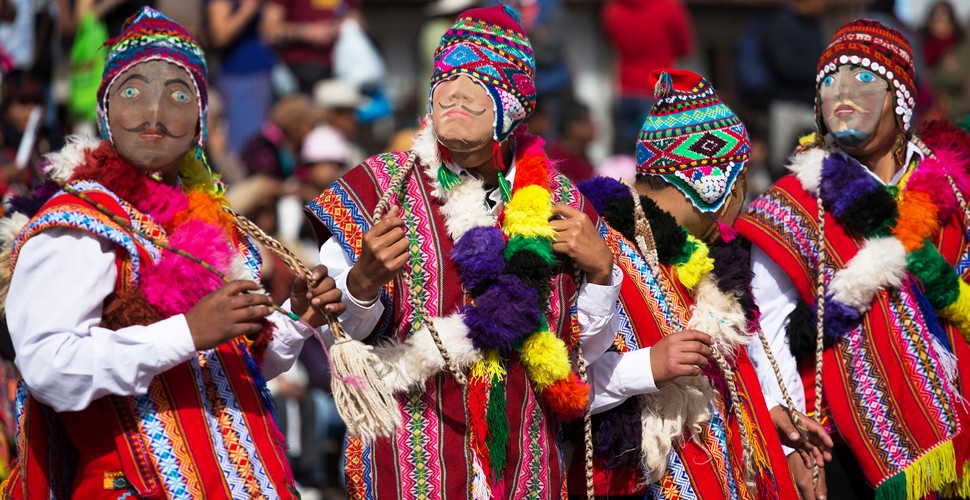 As much as Peruvians enjoy food and drinks at a party, they also love music and dancing. The Peruvian tradition of Andean music is famous worldwide for the tranquil sounds of its flutes and panpipes. Before these were made, the ancient people made sounds from sea shells, reeds, and animal bones. As a result of its mixed and varied cultures, Peru has a diverse folklore with a wide variety of dances and musical styles. The Spanish influences can be seen in "charango" harps and violins, which perfectly accompany the native drums and other instruments. 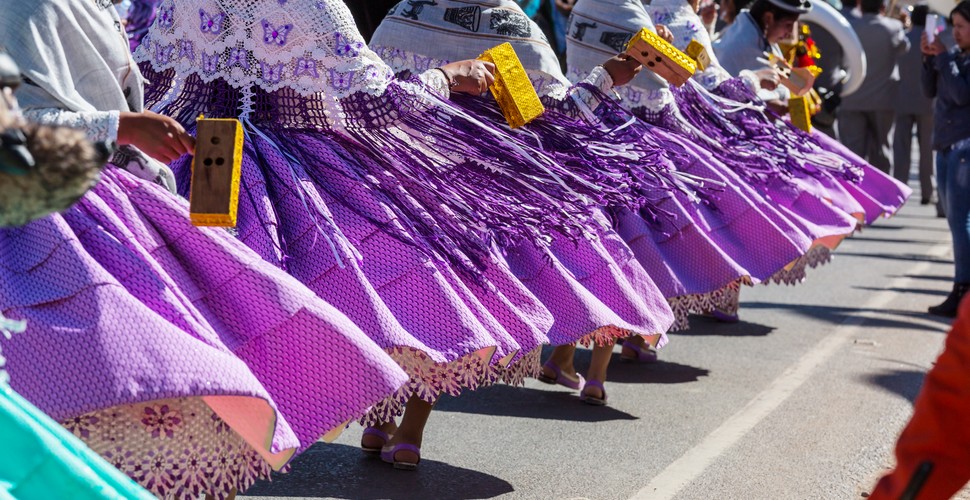 The rich and globally-appreciated Peruvian cuisine is also a result of the melting pot of cultures in this area and is steeped in the Peruvian tradition. The ancient technique of Pachamanca is still used nowadays, consisting of placing meat and potatoes in a hole in the ground and covering it with hot stones. Peruvians are not afraid of experimenting with new flavors, combining different aromas after using them for thousands of years. Traditional dishes consist mainly of meat, potatoes, quinoa, alpaca, maize, and guinea pig. They have slowly fused with the European dishes brought by conquistadores and immigrants, lifting Peruvian cuisine to new heights and making it as respected and appreciated as French and Italian cuisine. 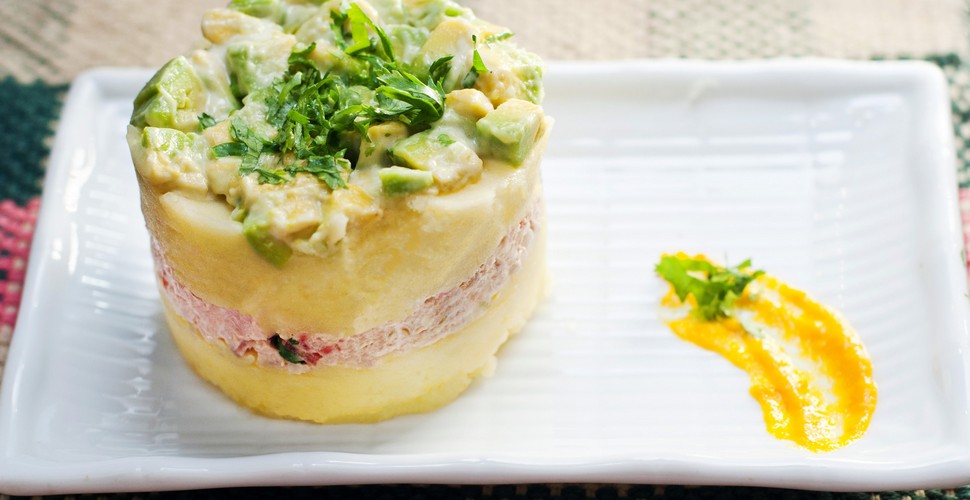 If you travel to Peru, you will see that every plaza has at least one church or cathedral, if not more. Although Christianity was brought to Peru only 500 years ago by the Spaniards, the people here were already profoundly spiritual. They worshipped things like the sun, mountain peaks, and stones and made animal sacrifices, all of which the Spanish considered pagan and tried to eradicate. However, as much as they tried, they never reached specific remote communities that have retained their faith and religious practices. In any case, what is left today of religion in Peru is something called "syncretism," a mixture of the Inca beliefs and Christian values, which is a fascinating part of Inca and Peruvian tradition and culture. 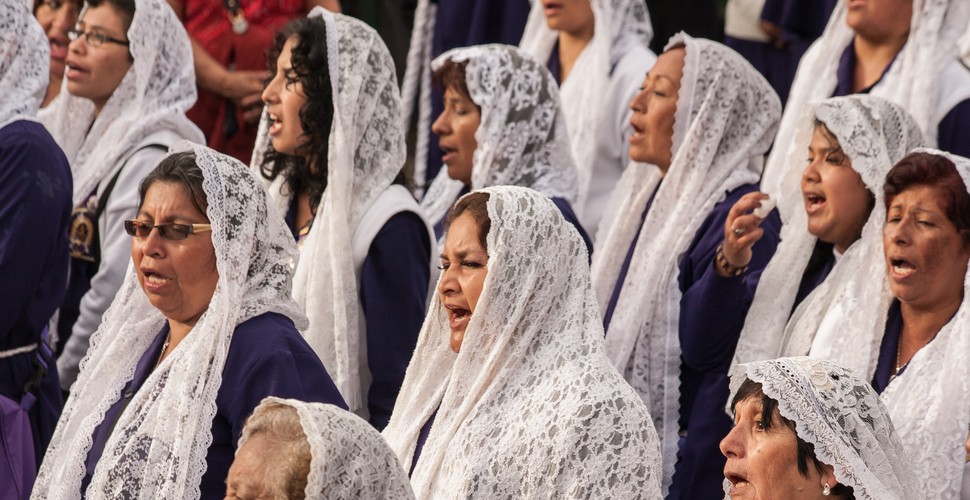 Contact us here if you want to experience Peruvian customs and traditions fully during your visit to Peru.