If you arrive in the Peruvian capital of Lima between October 18 and 20, you’ll be in for a surprise. Thousands of “Limeños” will be walking the streets, all clad from head to toe in purple, in one of the largest religious parades in Lima or Peru. Here is your guide to everything you need to know about Lima’s Sr de Los Milagros celebration!
The Lord of Miracles in Lima is one of Peru’s most important religious festivities. Its main ceremony is the procession through the streets of Lima, the largest in South America. During this 24-hour procession, 1000s of purple-clad believers follow those carrying the icon on a 2-ton litter resting on the shoulders of faithful who carry it in short shifts before passing the load onto the next group. 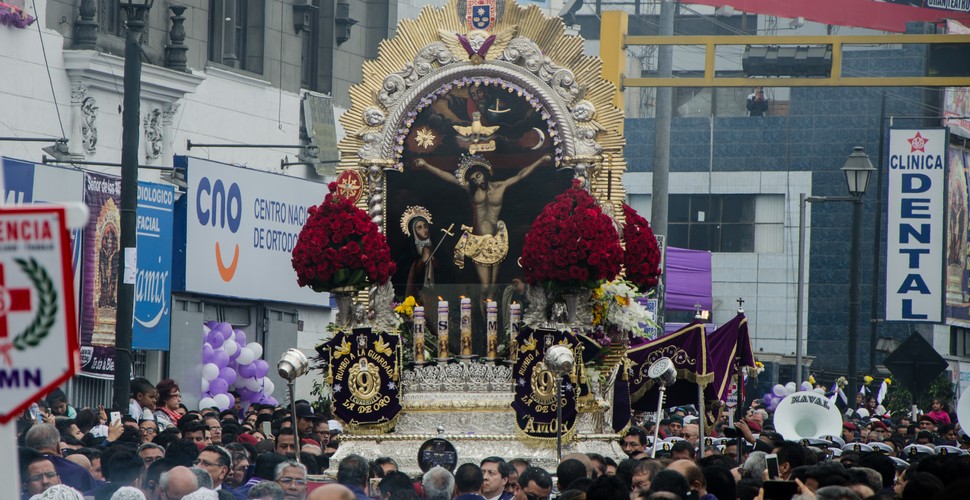 In 1746, a massive earthquake struck Lima, destroying everything in its path. It was recorded as 7.8 magnitude, one of the largest ever to hit the city of Lima. The building that housed the painting of Sr de Los Milagros was devastated, along with all the neighboring buildings, and the only thing not to crumble to the ground during the earthquake was the wall where the mural was painted. Due to the massive damage done to the surrounding buildings, which had collapsed entirely, it was seen as a miracle that a painting of Christ survived the earthquake, and it was viewed as a sign of good fortunes to come. 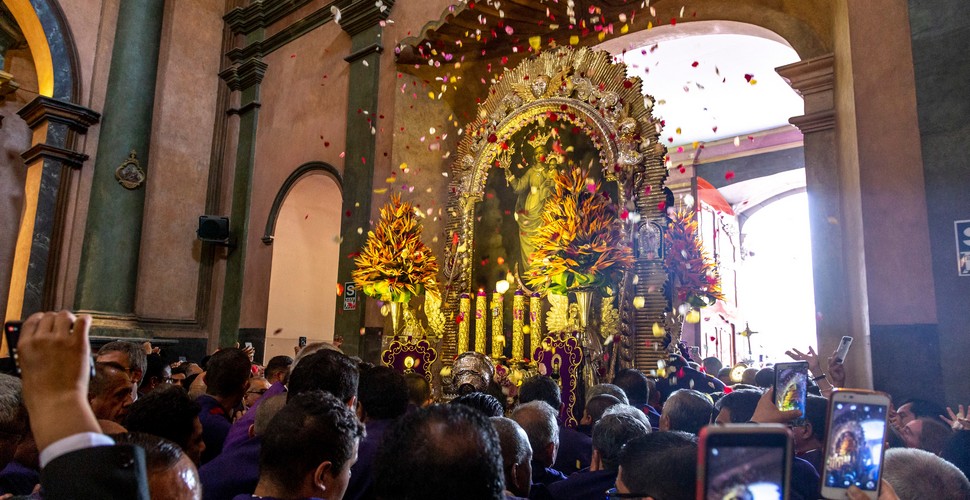 As they make their way from Las Nazarenas church, crossing downtown Lima, to the church of La Merced, singers, dancers, and street sellers line the streets with flowers. There are many traditional dishes on offer, with a wide variety of desserts, such as the famous Turron de Doña Peppa, a sticky aniseed-flavored sweet. Its creator was a black slave, Josefa Marmanillo (Doña Pepa), who believed that her devotion to the Lord of Miracles returned her the use of her arms and hands. Lima’s bullfighting season in October and November is named after and held in honor of the Lord of Miracles, with the best bullfighters in the world gathering in Lima’s 200-year-old bullring (the 2nd oldest in the world) to compete. 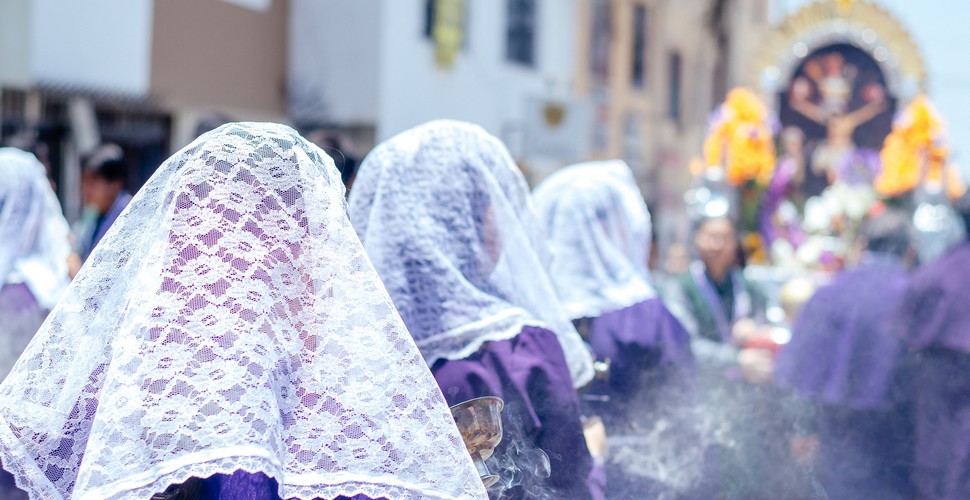 Africans in Peru were allowed to form guilds that managed the churches' altars for baptisms, meetings, wakes, and sometimes economic assistance. Around 1651 the Pachamamilla guild was founded, and, in its seat, an enslaved Black Angolan or freedman painted the famous image on one of the crude adobe walls of the slave quarters. Four years later 1655, a devastating earthquake shook Lima and Callao, tumbling temples, mansions, and houses, with thousands dead and injured. Pachacamilla was leveled, except for the wall with the Christ painting. Meetings and masses began to be held at the image, now considered miraculous, despite authorities' disapproval as the gatherings grew in size. The painting survived numerous attempts to erase it, another earthquake of astonishing destructive power in 1746 and subsequent tidal wave. The Church of Las Nazarenas was built around the image, and a replica was made for the procession, which has been held every year since the 1746 earthquake. 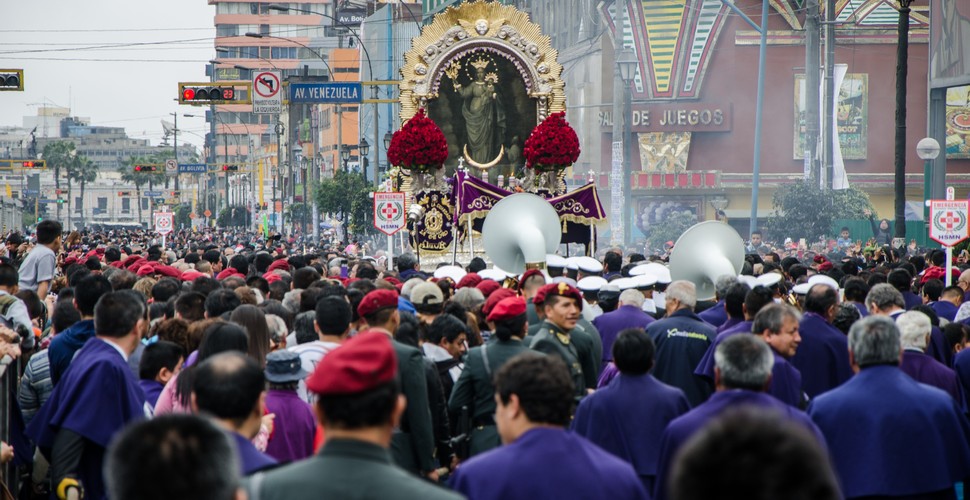 If you are in town for the celebration, join in the festivities, and go on foot. Contact us at Valencia Travel if you would like to arrange a tour of this marvelous celebration in Peru´s capital! 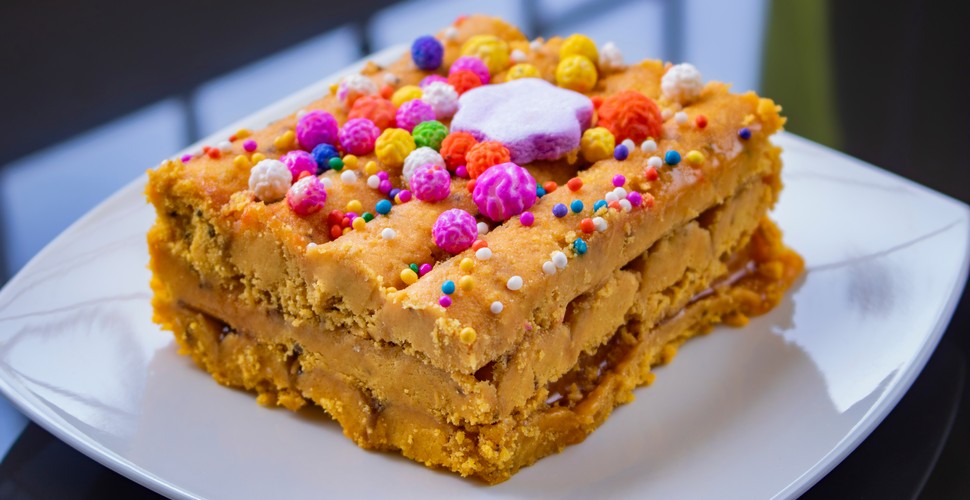