Most travelers to Peru arrive via the capital, Lima. Lima international airport makes the capital, also called the ‘City of Kings,’ a must-see, and most people will spend at least a night there on their Peru vacation. If you want to get to know Lima better before shooting off to Machu Picchu, there are many historical and impressive sights to see in downtown Lima. The historic center of Lima is on the UNESCO World Heritage List and, despite being damaged by a series of earthquakes this century, is a great place to get a feel for Peru’s intricate, complex history. Here is what you can see if you are sightseeing in downtown Lima. 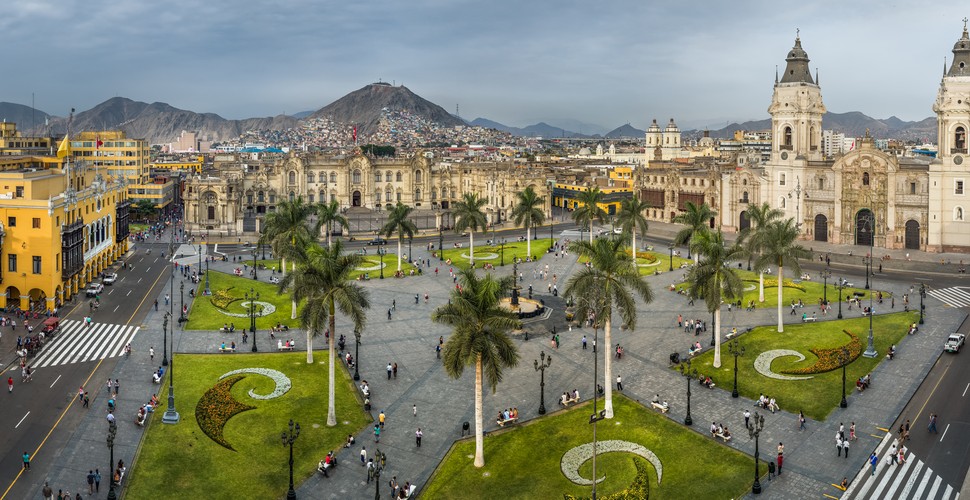 The Main Square is the historic center of Lima. The city was founded there in 1535, and it is also where the independence of Peru was declared in 1821. The most important architectural monuments are in its surroundings, such as the Cathedral, the Government Palace, the House of the Oidor, the Archbishop’s Palace, and many more. The Main Square has an area of 140 square meters. Jirón de la Unión, Jirón Carabaya, and Jirón Huallaga are intercepted by the famous streets, where there are handicraft shops, desserts, restaurants, and several sights to see. The Historic Center of Lima, declared a World Heritage Site in 1991, is the central hub for sightseeing in the downtown area of Lima, with the main square at its fulcrum. 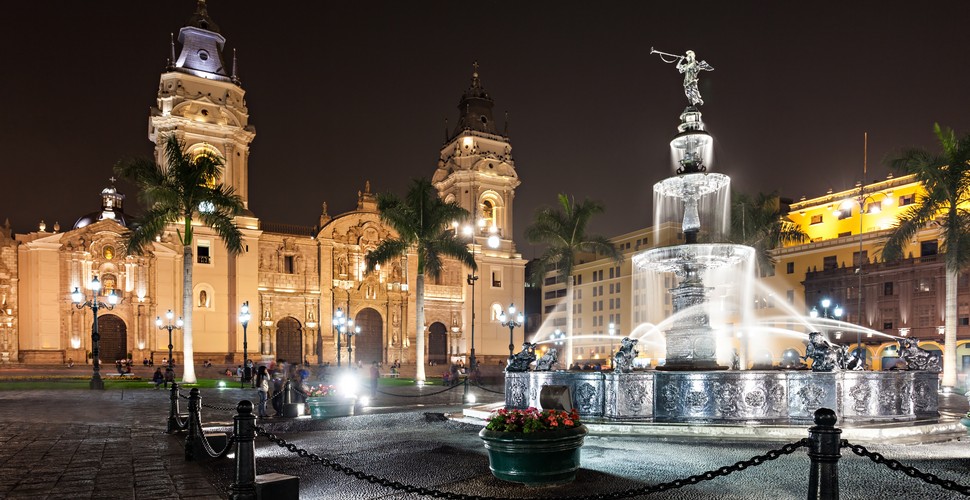 Cathedral on The Main Square

This stunning baroque Cathedral is dedicated to St. John the Apostle and is well worth a visit to understand the grandeur and vision of the colonial period in Peru. There are 14 side chapels dedicated to different saints and apostles, and the Cathedral also houses the tomb of Francisco Pizarro. He laid the first log used in its construction, situated on the Plaza Mayor, Lima.

Originally the elected building of Francisco Pizarro, it has since acted as the headquarters of all the Peruvian governors, Viceroys, and Presidents until now. Situated on the main square, its notable features are the fantastically conserved rooms inside, including the official residence of the President of the Republic and the ceremony of the changing of the guard that takes place in the courtyard every day at 11:45 am.

The San Francisco Church and Convent are Lima’s main tourist attractions, and the Lima Cathedral is one of Peru's most important examples of colonial architecture. Situated just a block from the main square, a guided visit is well worth it to gain an insight into religious life and culture during the Spanish colonial rule. Highlights include the library with over 25,000 volumes, intricate wooden carvings, and the austere colonial paintings found throughout. The main attraction for most visitors is the catacombs, where over 30,000 people were buried until 1808. The catacombs were only discovered in 1943, and it’s eerie to wander through the silent, claustrophobic crypts filled with human skulls, bones, and remains. 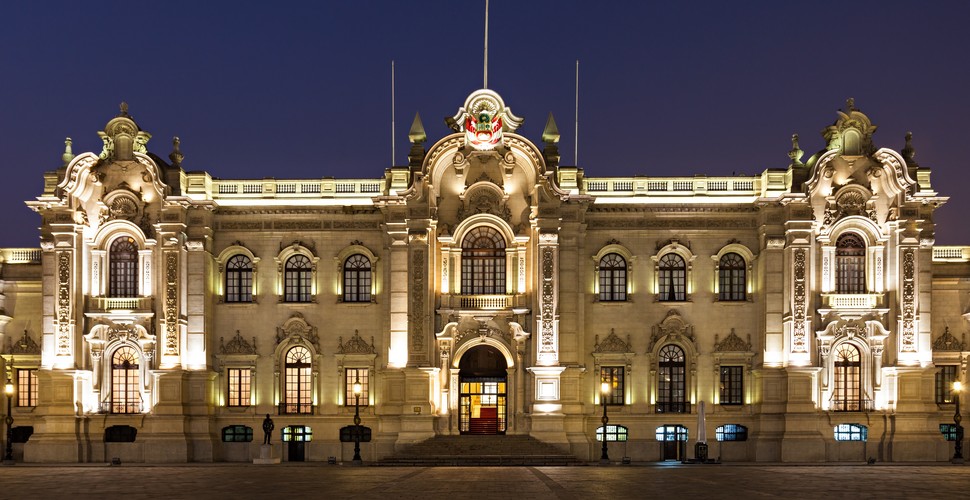 This interesting religious site was granted to Dominican Friar Vicente de Valverde, who accompanied Pizarro throughout his conquest of the Americas. Originally built in the 16th century, this pink church has been rebuilt several times and boasts the only church steeple in Lima. It is famous for housing the remains of Santa Rosa, Lima’s patron saint, and San Martín de Porres, South America’s first black saint. The convent is a large complex of colorful courtyards decorated with typical Spanish tiles from the 16th century, baroque paintings, and lots of greenery. It is well worth a visit to downtown Lima. It’s an oasis of calm amid Lima’s madness and is an excellent place to wander. Take a guided tour if you want to climb up to the top of the steeple for great city views of Lima.

The San Pedro church was built by the Jesuits in 1638, which is a fine example of the baroque style with typical Spanish glazed tiles and Moorish-influenced carvings. This is slightly off the main tourist trail of Lima, so it tends to be less crowded and is worth a visit for the opulent gold altars and decorations found throughout the church. 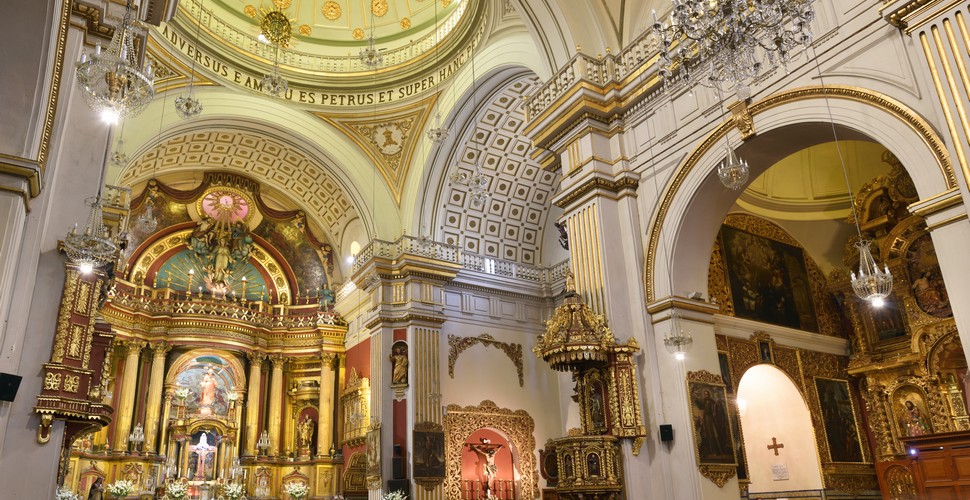 Inside The San Pedro Church

This secondary main square was inaugurated in 1921 to celebrate the 100th anniversary of Peru’s independence and is named after Peru’s liberator José de San Martín. It is one of the most beautiful squares in Lima and is surrounded by grand buildings influenced by the French architectural style typical in Lima in the 1920s. This is an excellent place for people-watching. Check out the statue of San Martín in the middle of the square and the bronze statue of ‘Madre Patria,’ the symbolic mother of Peru. She was supposedly meant to have a crown of flames, but unfortunately, the craftsman confused the double meaning of the word ‘llama’ in Spanish, so she ended up with a llama on top of her head!

The original church was a small wooden structure built before Lima was founded, and the first holy mass of Lima was held here in 1534. Today, it is dedicated to the saint Fray Urraca who is said to have performed many miracles in the 15th century. 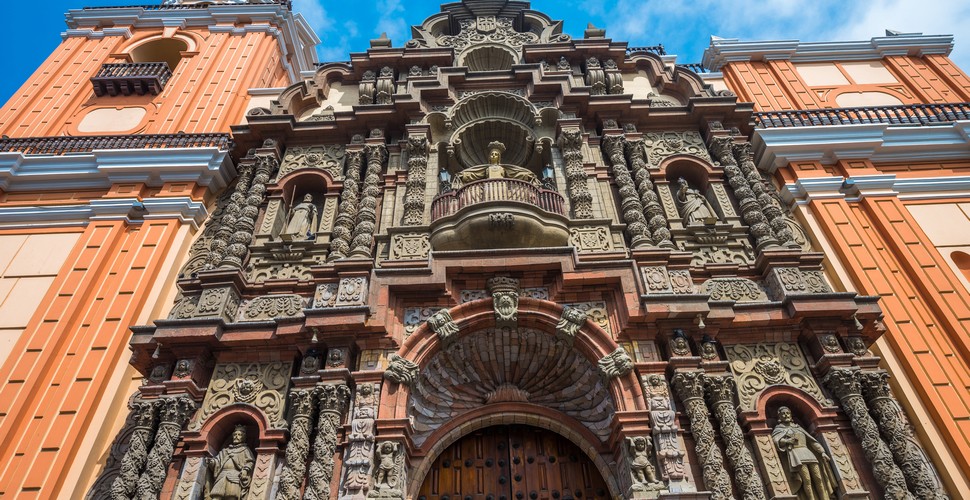 This hotel was once the city of Lima’s most wealthy and famous hotel frequented by movie stars like Ava Gardner and John Wayne and writers such as Ernest Hemingway, along with JFK, among many other historical figures.  This hotel is the perfect place to finish your exploration of Lima’s main square and historic center with one of Lima’s best pisco sours and a taste of years gone by. This was the first modern hotel built in Lima back in 1924 and, in its prime, was an opulent affair. Today, it is more of an old-fashioned place with “characterful” waiters, but their pisco sour is undeniably one of Lima’s best.